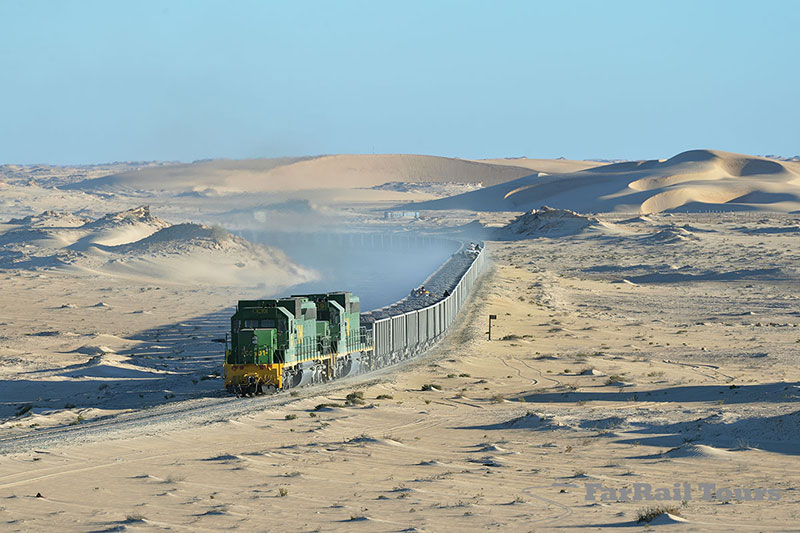 Between 1961 and 1963, the mining company “Société Anonyme des Mines de Fer de la Mauritanie” built a 652km long standard gauge line from the Atlantic port of Nouadhibou to the iron ore mines in Zouérate. From the beginning, the railway held a record:- the longest regular trains in the world, with its loaded trains of up to 2.5km (1.6 miles), hauled by up to four, and occasionally five, diesel locomotives. The line runs close to the border with Western Sahara, through sparsely or non-populated desert areas. You can travel by train, but that’s a very dusty adventure!

There are a number of exciting photographic opportunities. The length of the trains and their load, up to 17,000 metric tons, is an amazing sight. The railway operation has its own flair. Just spending the night in the desert, far from any civilisation, and watching an ore train in the distance as the rays of a front headlight of a diesel loco fingers its way through the sand dunes is an incomparable experience.

has more to offer than most of us may imagine. Mauritania is far from the beaten track and there is no mass tourism. You’ll experience authenticity and meet open minded people who still see tourism as an opportunity for their country. You’ll not suffer from the daily dance performance alongside the battle for the cold buffet each evening.

offers endless, almost untouched sand dunes in the , green oases with singing birds instead of crowds of tourists, and the Kediet Ijill, at 915 mt above sea level the highest mountain in the country. It’s right next to the ore mining area of the Société Nationale Industrielle et Minière. Our local guide will provide everything in order that we can enjoy the scenery and the life of Mauritania and make sure we get amazing pictures, as well as an insight into the local rural life. On our cultural travels, a chef will travel with us and offer us some traditional food. 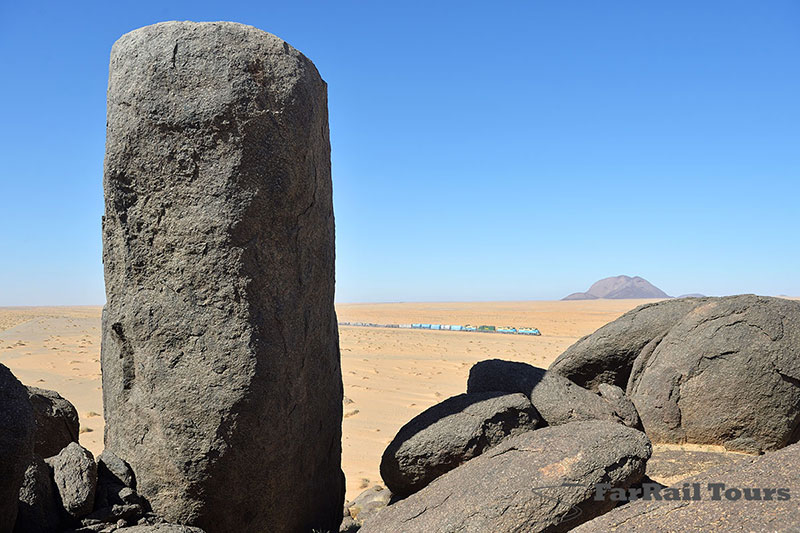 The line was opened in 1963. At that time it laid completely in Mauritania and had to cross a mountainous section. After the line was nationalised in 1974 the government negotiated a new route with Western Sahara, to avoid the mountainous part, and in 1978 they inaugurated this new section, which crosses Western Sahara for 5km (3.1 miles).

The iron ore is transported from the mines in the desert to the port of discharge on the peninsula of Ras Nouadhibou, in Casado. The railwaymen call this place Point Central or, in short, PC. Trains can be turned on a terminal loop. This is carried out by a single locomotive as the line locomotives leave the train as soon as they arrive. 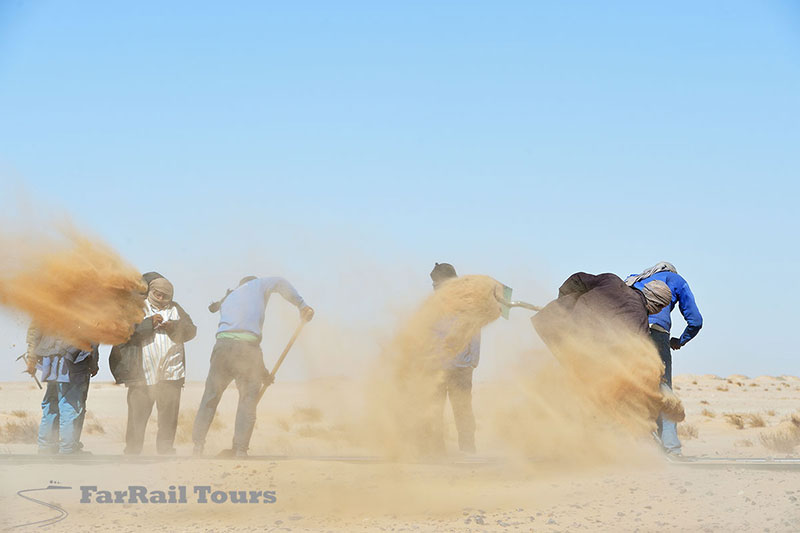 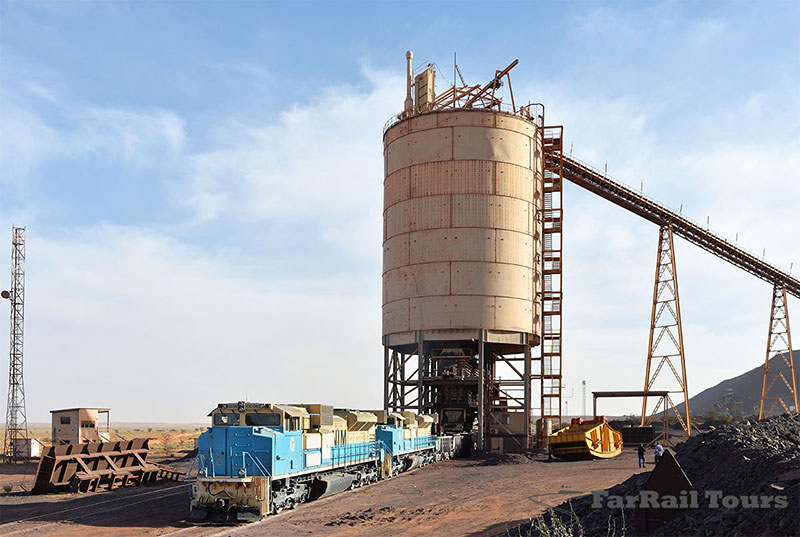 From Nouadhibou the line heads about 460 kilometres to the east before it turns to the north near Choum. To get access to two additional mines, they built a 70km long link from F’dérik to Guelb and M’Haoudat.

Two pairs of trains run daily. If the production levels are high it can be three or even four pairs of trains. Besides the ore trains they operate a weekly water supply train for Zouérate. This train will be filled at the oasis of Boilenoir.

People are allowed to travel in the ore wagons or the flat wagons free of charge. This is a very dusty mode of transport, but the old SNCF passenger coach isn’t much better. However, on almost every train you can see people travelling in the ore wagons. The trains V3 and M4 are the ones which have the passenger coach attached. Those two trains have a timetable, but delays of several hours are not uncommon. 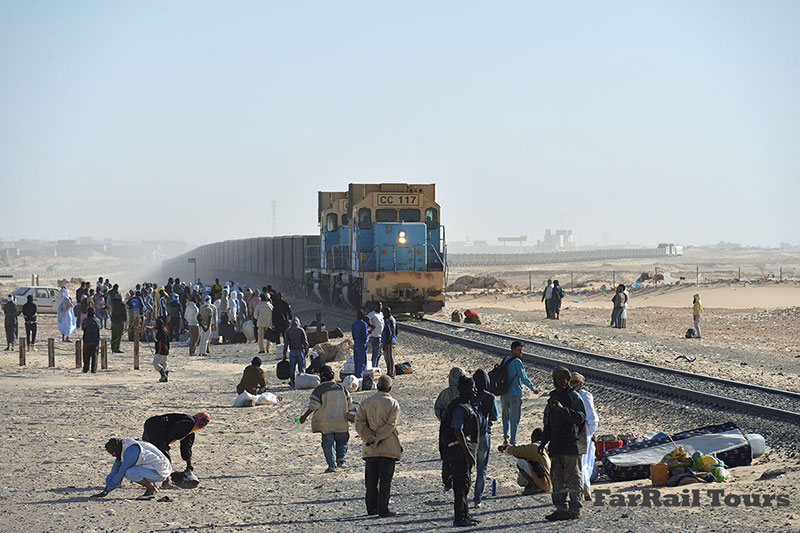 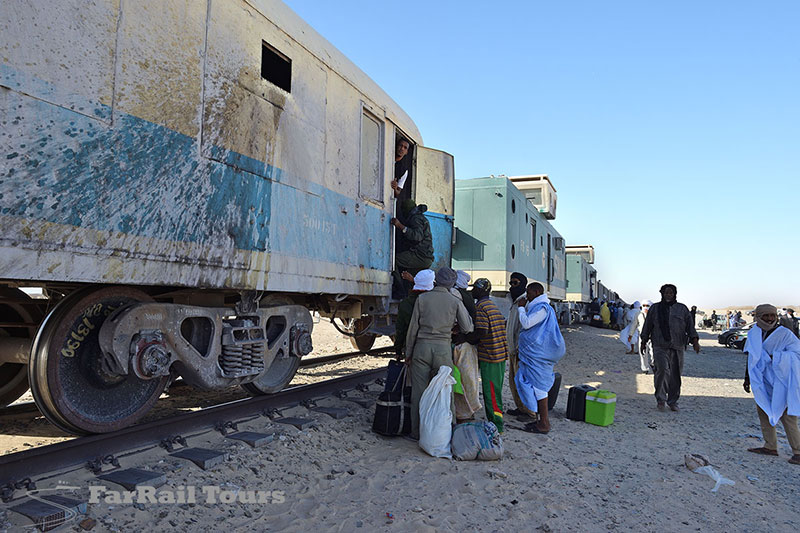 Apart from people, also general freight, camels and lorries are common goods on the railway. For camels (on their way to slaughter) and lorries they’ll attach some flat wagons behind the ore wagons. The people in the ore wagons often carry fish, food and sheep with them. Some of the trains have a wagon for employees of the railway, SNIM, at the end. The SNIM company, which is responsible for the passenger traffic (the wagon at the end of train V3 and M4), is called TFM. The branch in charge of tourist traffic (they own a double deck passenger coach) is called SOMASERT. 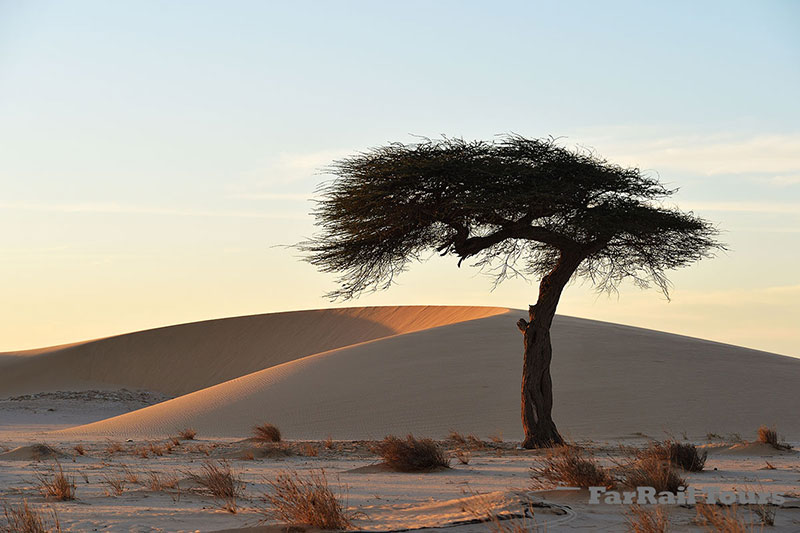 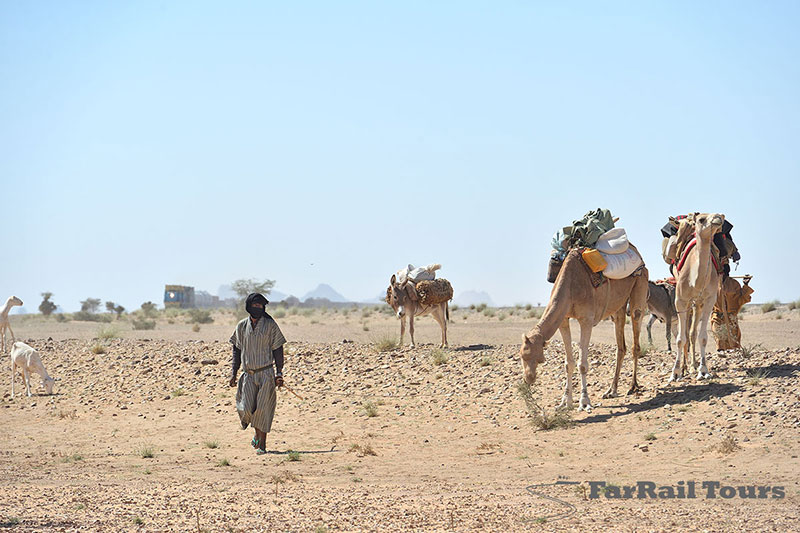 The four different modes to travel on the trains are:

The TFM passenger coach is often crowded and in a poor and smelly condition. Travelling in it is no joy! The brake van FS17 is reserved for the management of the railway. All brake vans are air-conditioned. 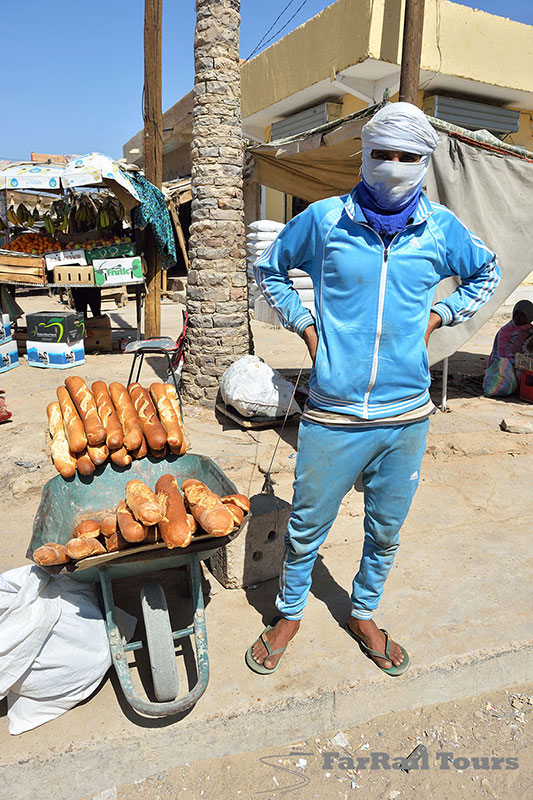 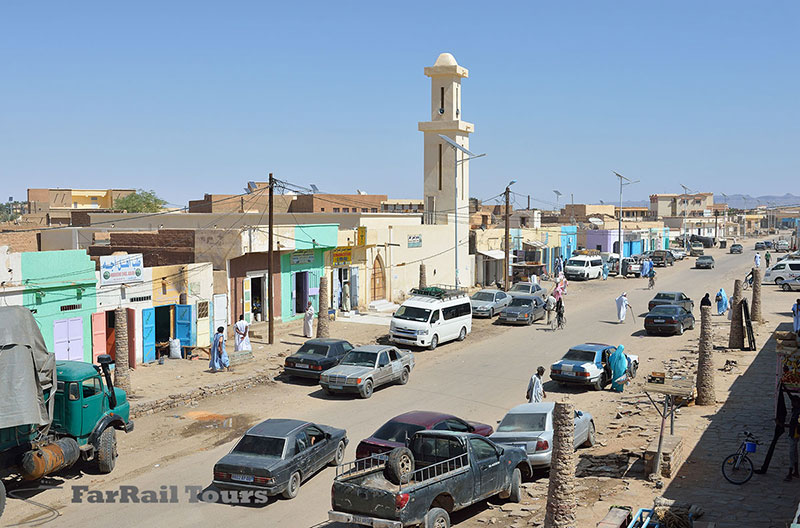 During daylight you can expect to see at least one or two trains arriving from Nouadhibou and two departing trains to Nouadhibou. In addition there are movements between the four loading points and, additionally, there might be the water supply train.

Apart from the arriving trains, there are only a few movements to be seen in Nouadhibou during daylight. 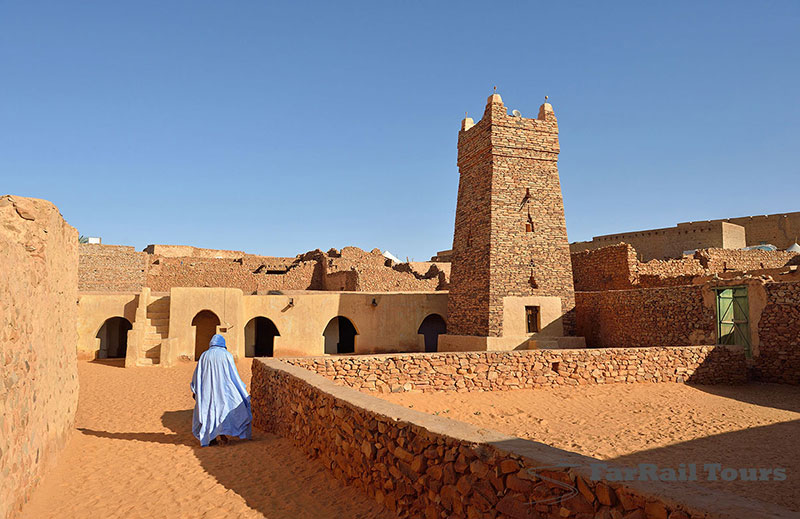 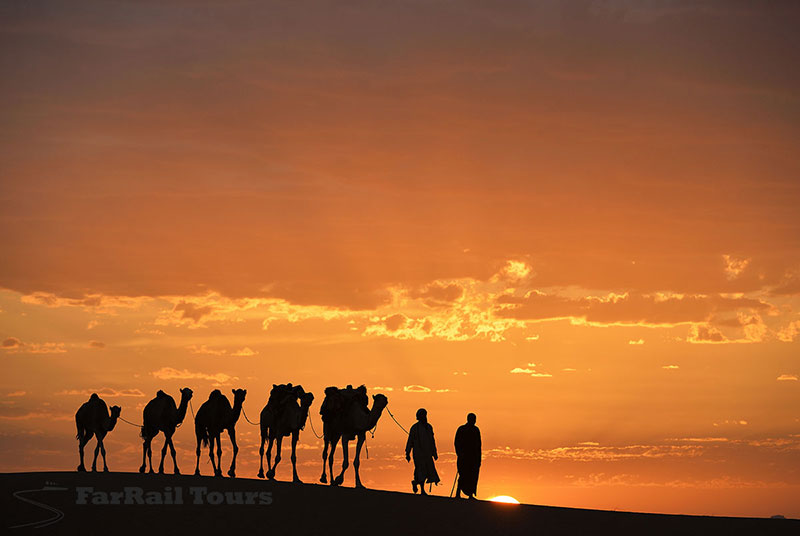 Loco wise, the variety is very limited. The elderly SD40-2 locos were some time preferred over the new SD70ACS locos. Those six new, 3,310 kW strong EMD locos sometimes had problems with their turbochargers. After solving these problems the new EMD locos now serving most of the freight trains.

The line speed is 40 km/h, the rails are designed for 26 tons axle load. An increase of axle load to 30 tons is planned. In recent years they added two sidings to allow four pairs of trains per day.

The daily runs of the track gang speeders have some influence on the timetable. 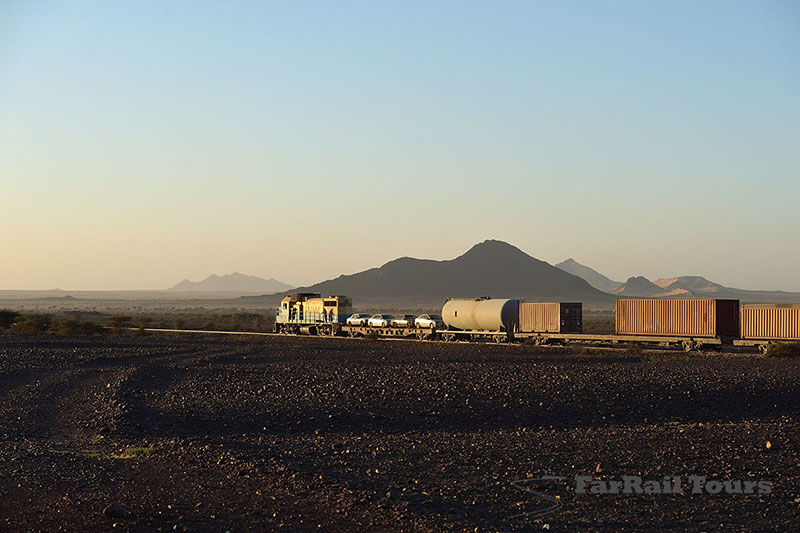 The northern part of Mauritania is neither a major destination for tourism nor for terrorism. Despite this, there are some foreigners in Nouadhibou for the fishing business. Our hotel in Nouadhibou has a sufficient standard and offer electricity, hot water and internet access. But you should not expect a perfect holiday hotel in this corner of , especially in Zouérate. The bivouacs have mattresses and simple blankets, but there are no proper toilets. The desert is vast and endless …

The city of Zouérate has seen better times, when the cinema and the theatre were still open. A fair proportion of the inhabitants do nothing different from Europeans: spending hours looking at their mobile phone screens! All the people are friendly and helpful. 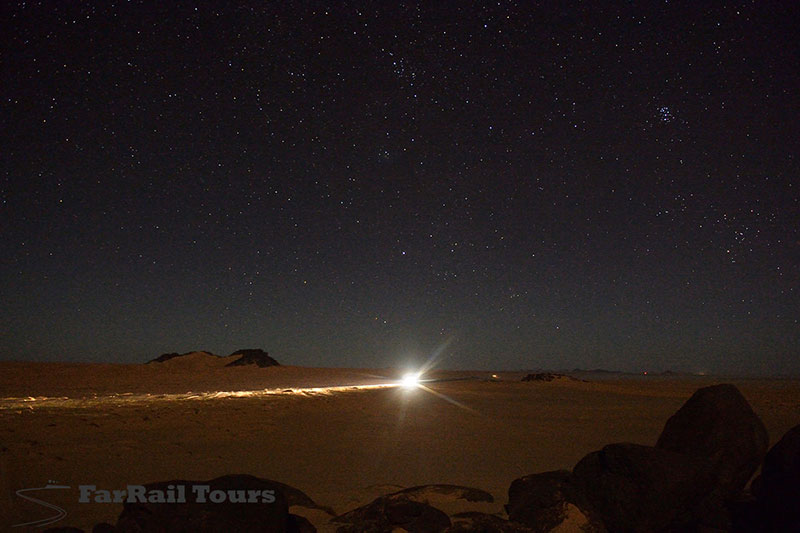 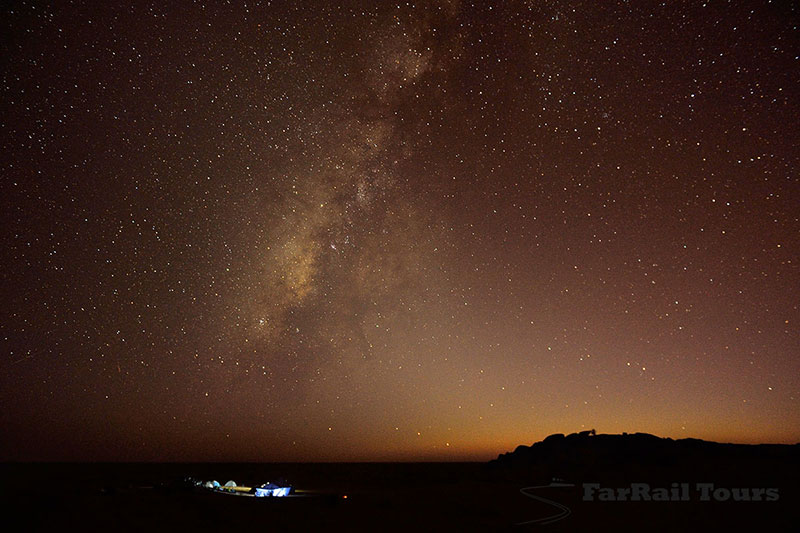 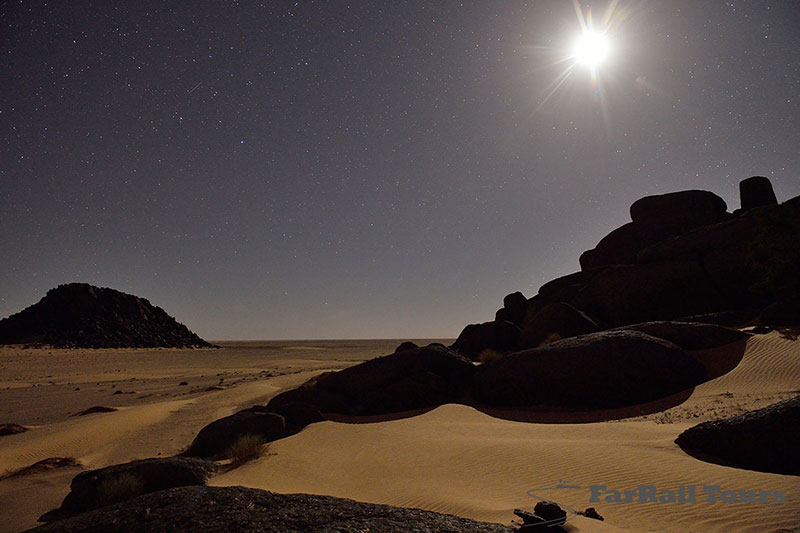 We’ll cover long distances over unpaved or non-existant roads. Both of the longest trips will take more than ten hours – without photo stops. We’ll carry sufficient food, tea and water with us. Any technical problems needing to be resolved in the desert may extend our travelling time drastically. On the journey we’ll not find any sanitary facilities. In the case that you need to release any ballast in the desert – there might be no bush to hide behind (but there are dunes)! In the desert, no medical aid is available. There is no pharmacy in the desert either. You must carry sufficient medicine with you if you’re in need of some medication. Your health condition should allow you to travel in a 4WD car for hours.

Trains, even those with a timetable, are for the ore traffic. And iron ore doesn’t care when and where it will arrive. Bear in mind that hefty delays are common and unpredictable. Delays can destroy the hopes for a certain picture, but they can also offer new opportunities. There is no guarantee for the number of trains we’ll see, for punctuality or certain stops at sidings and stations. We’ll keep in touch with the railways and will follow developments. 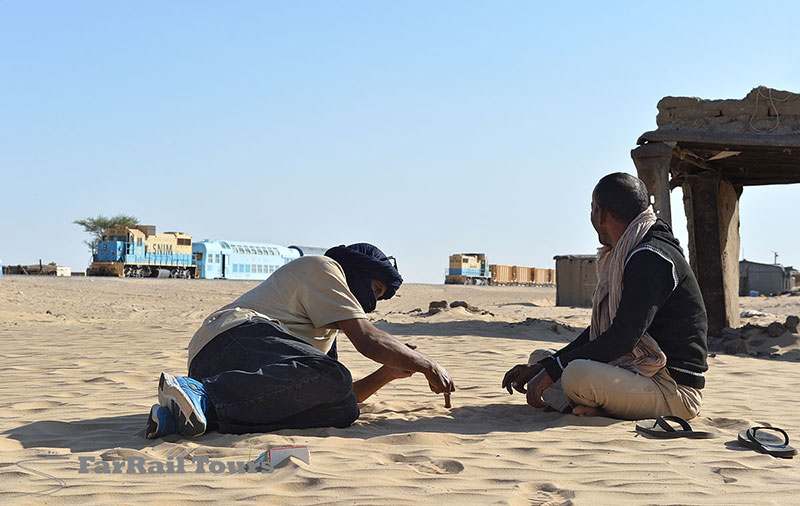 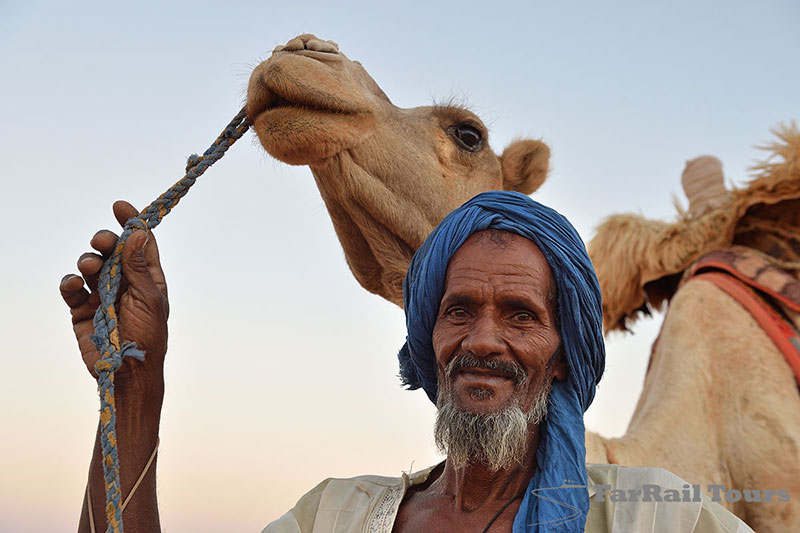 Close to the trains it can be very dusty, hence you should consider the wind direction when choosing a photo position.

The visa for will be issued on arrival (55 Euros plus handling fee of 25 Euros). Spain (Gran Canary) can be entered visa-free for many nationalities.

Hygienic and environmental standards in Mauritania do not conform to European, Japanese, Australian or North American expectations. Carrying some toiletries in your photo bag is hence advisable. Please bear in mind that accommodation and transportation in Mauritania falls short of EU/US etc. safety standards. Always use common sense when crossing roads and railway tracks. Neither FarRail Tours nor the local agency can be held responsible and neither will accept any liability whatsoever in the case of any accident, damage or delay. We suggest you take out a comprehensive overseas accident and health insurance policy as well as travel cancellation insurance. 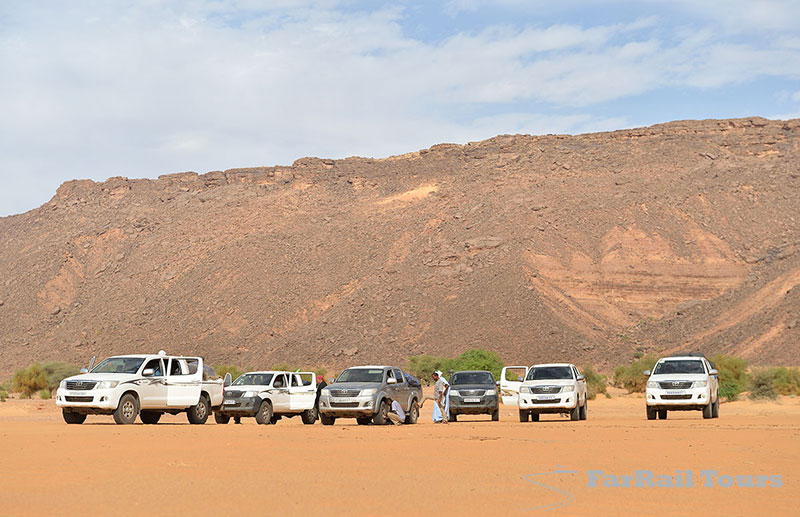 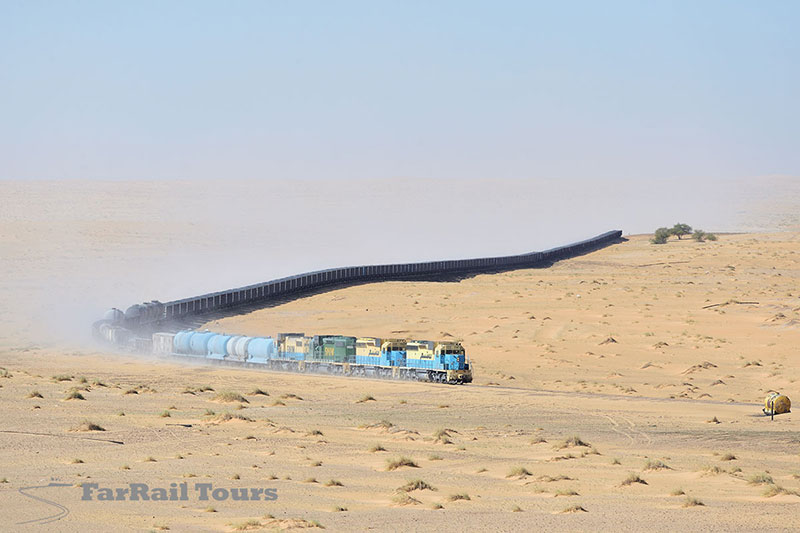