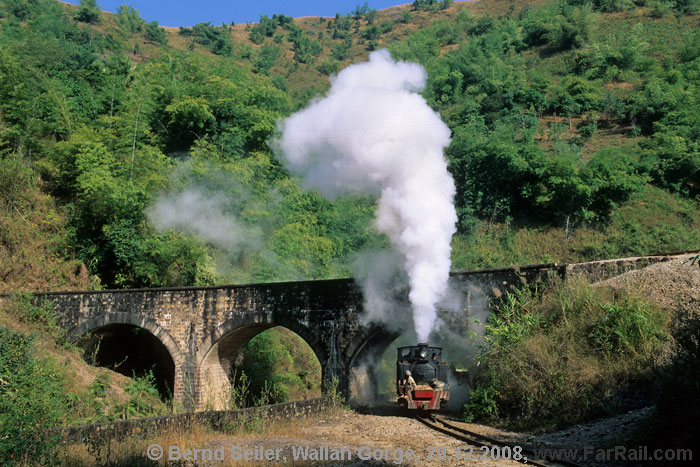 The trip report from our Namtu-tour in 2008 you'll find here.

On the spectacular mountain narrow gauge line of the lead and silver mines railway in Namtu there are still two serviceable British steam locomotives available for charter trains. Namtu alone definitely justifies the long journey to Myanmar. The complete railway including all technical equipment and its locomotives is running on its very last legs. In Europe officials would have only one “solution” for the line: to shut it down immediately. As a Chinese company has become involved in the production already, it could just be a question of time when this fantastic railway will be closed. Our charter trains will look fully authentic. It will be hard to say whether these trains were running in the age of regular steam of the early 1980’s or in 2009.

The press has recently published many very bad reports about the country. Of course, Burma has no democratic government, this has been known for decades, but on our trip we’ll probably not see anything of what has been reported. We’ll meet lovely, welcoming people, we’ll feel the flair of the country which can hardly be described in words. It’s very easy to become a lover of Burma once you have set foot in this rural country! 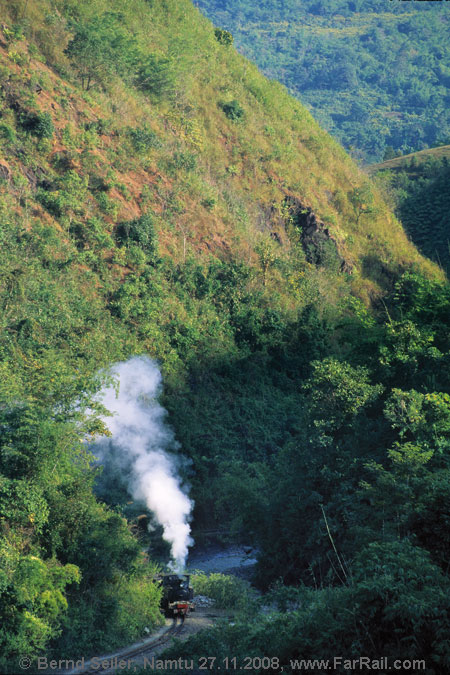 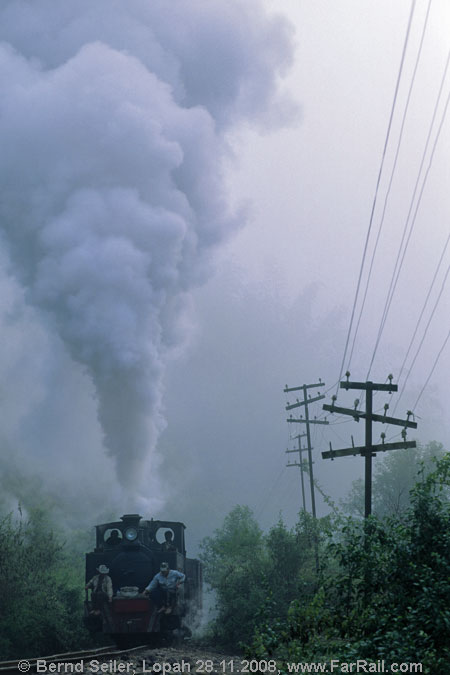 Namtu is the headquarters of the Burma Mines Railways. The Namtu area is restricted. Fortunately, for the last few years it has been possible to get a permit to visit Namtu while travelling in government-organised groups. The 2 feet gauge railway runs from Namyao on the Mandalay - Lashio branch of Myanmar Railways via Namtu to Bawdwin. Silver and lead ore are carried to the smelter at Namtu. Steam was largely replaced in the 1970s and 1980s but today two steam locos remain in working order. One is Bagnall 2-6-2 No.42, built in 1928 and the other is Kerr Stuart 0-4-2T No.13, built in 1914. FarRail tours paid for the overhaul of No.13 in 2008. The locomotive is in good technical condition. Since a major repair No.42 is also available to haul special trains along this exciting mountain railway. Beside these two serviceable steam locos, there is a small museum in Namtu with four further preserved locomotives. The railway also has some very interesting rolling stock and the shed is very picturesque. The rail-trucks or rail-lorries are delightful “critters” in themselves and are a unique feature of the railway. The line is spectacular with hairpin bends, a spiral with a 540-degree curve, two reversals, rural villages, pagodas and steep mountains. The photographic potential is exceptional, so be prepared and bring plenty of film or extra memory cards! In the morning usually one can experience steam exhaust while the afternoons are pleasantly warm. 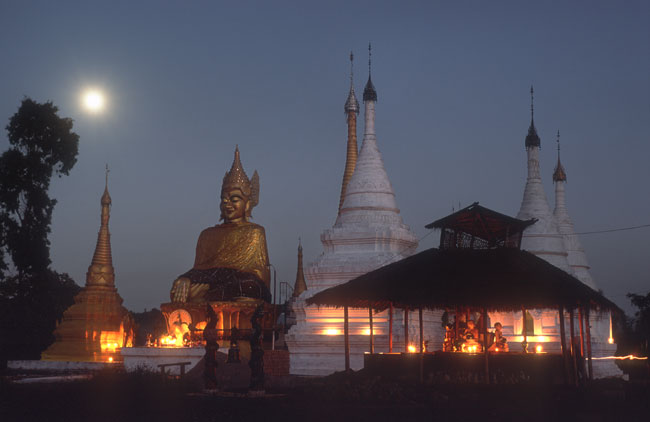 The spectacular 540 degrees curve is just before Wallah Gorge. The line from here to Bawdwin is extraordinarily exciting with reversals, hairpin bends and mountain views. After five years of negotiations and bargaining, arranging and paying for the overhaul of No.13, we finally managed to get steam up to Bawdwin after almost three decades of diesel only trains to Bawdwin. So we’ll go by steam from Wallah Gorge to Bawdwin! This part is almost exclusively served by lorry railcars and only a few trains will go as far as Bawdwin. On this breathtaking part of the Namtu Mines Railway, which doesn’t need to take second place behind the Darjeeling Himalayan Railway, we’ll make many runpasts and photo stops. We’ve ordered two trains on this superbly scenic part of the line to use both, the early morning light and the soft afternoon light.

For our trains we’ll use both serviceable steam locomotives. Due to the technical condition of the line and the lack of spare parts for the locomotives it can’t be guaranteed that a certain locomotive will be able to steam up. But it will not get any better the longer you wait to go there!

If you want to come with the group to Namtu, then we will need your personal and passport details at least three months in advance, to secure the permit.

Despite the very intense steam railway programme, we’ll include some of the most remarkable tourist spots of the country. As soon as the political situation changes you’ll never get another chance to see these ancient pagodas and other sights without being bothered by herds of other tourists. We’ll see almost only domestic pilgrims to the holy places, a situation similar to what Asia used to be before it became one of the main tourism epicentres. At many places we’ll see almost no aggressive vendors as there usually is at many tourist places all over Asia. So enjoy visiting over 1,000 or even 2,000 year old cultural sights to get an unspoiled impression of the culture of the country.

The end of tourism in Burma: 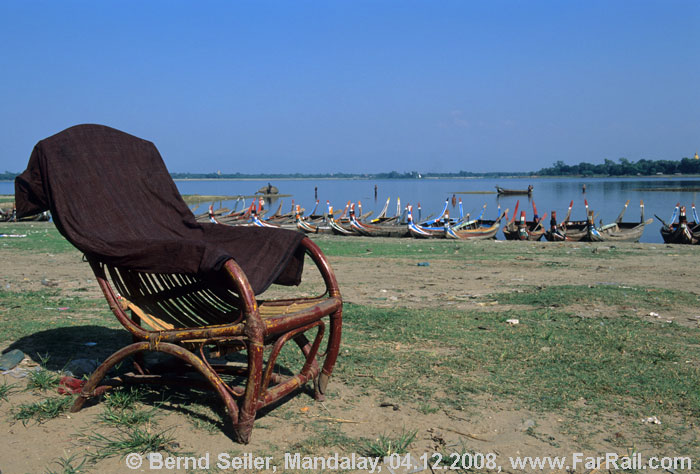 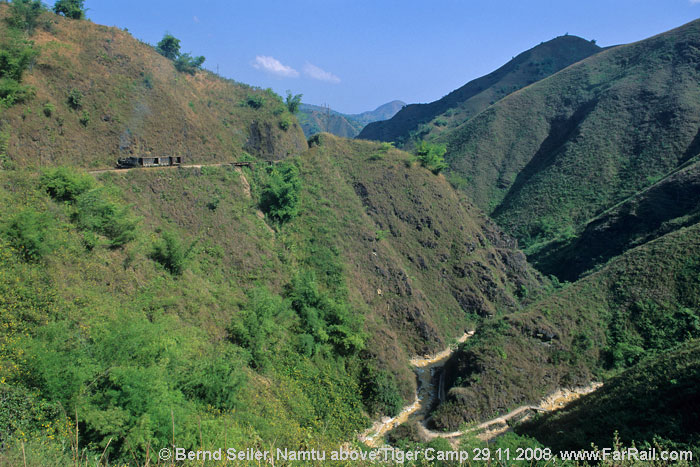 Our very ambitious programme of railway activities is focussed on using the early morning and the late evening light to get the best possible shots. It’s likely that we’ll need to get up at 5am occasionally to get the best results in photography and videography. However, at 6pm it’s dark, so we can get to the hotel quite early. Keep in mind that we’re not going to Burma to spend the day in a pool at the hotel. We want to see as much as possible. We want to experience something which is very close to its expiry date.

As an additional attraction we’ve transferred a serviceable steam road roller from a restricted area near Lashio to Namtu. The road roller was built by Aveling & Porter. In June 2009 the boiler inspector will visit Namtu. The engineer who owns the steam roller said there is no doubt that his road roller will pass the examination. That’s why we’re almost sure that we’ll see the steam roller at work during our stay in Namtu. It’s a dinosaur of the age of industrialisation which usually can only be seen in super shine-condition in several museums. But we’ll arrange a real working example! 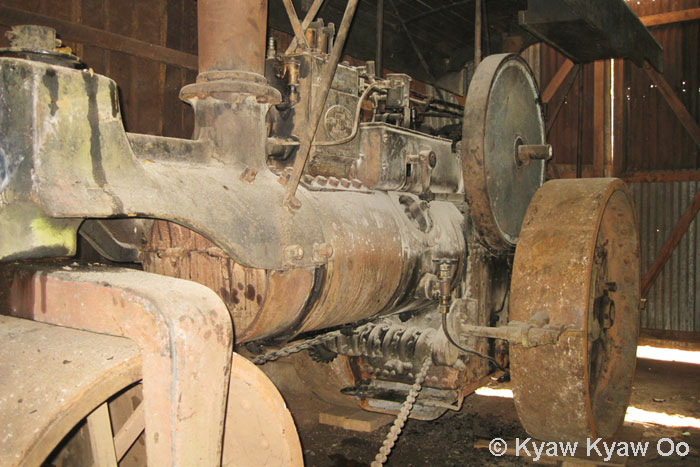 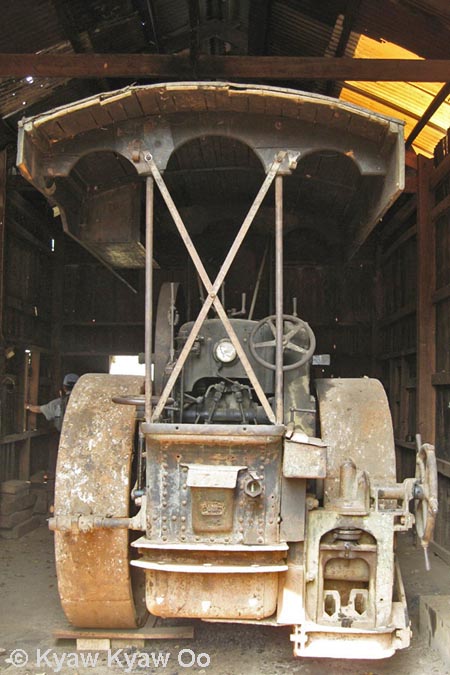 Some difficulties have to be mentioned. Timekeeping is not as important as in Europe or North America. Given this, the scheduled times are a declaration of intent by Namtu Mines Railways and delays of an hour are not unusual.

The technical condition of the railway and its equipment is not suitable for guaranteeing anything. It might be possible that some parts of the programme can not be operated as planned and need to be skipped without replacement or compensation. Paid money will not be refunded by any of the Burmese officials or railways, even if they couldn’t offer what we have paid for. However, we don’t expect serious difficulties in this matter, on all the recent tours the contractors in Burma tried very hard to fulfil all our wishes. 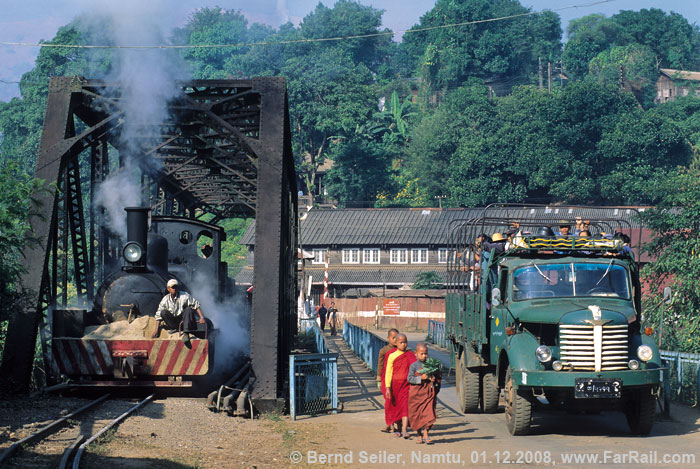 Charter buses (mostly with air conditioning), airplanes, hotels and trains represent the standard of our host country which may seriously deviate form European or North American expectations. While we will try to avoid long walks, some photo positions may require a bit of an extra effort. The itinerary is designed especially for photographers and video filmmakers. Because of the rich culture of the country and the exceptionally beautiful countryside it’s suitable for spouses or girlfriends as well.

Our hotel in Yangon (Rangoon) has large rooms, air conditioning, well equipped bath rooms, huge beds and is clean and tidy. However, our accommodation in Namtu is another matter. We’ll sleep in the nice, old wooden guesthouse of the mine administration. While rooms are large and nice, the facilities seem to be as old as the railway (they are not). Toilets have a water flush, but the installation seems to be from imperial days. Anyhow, the people are very gracious and welcoming and give you the best service they possibly can. It is a unique experience to get up in the morning to the sound of tropical birds, seeing fog around the hills below our guesthouse, and hearing the first whistle sound from one of our steam locomotives from down the valley. All who have stayed in the Namtu guesthouse enjoyed it immensely and lack of comfort was never an issue.

The quality of roads is poor. The road to Namtu has some wooden bridges where you might be afraid to cross with our tour bus. Be assured that many loaded trucks cross these bridges on a daily basis, and they are at least twice as heavy as our bus. 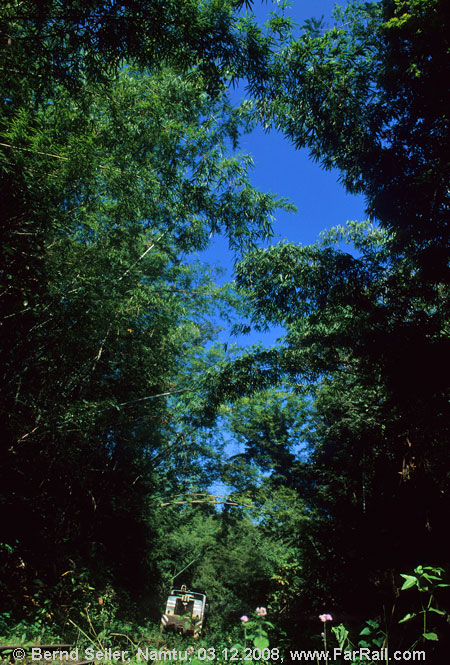 Please note that morning trains have a higher priority than a breakfast in the hotel. So breakfast will be served as a packed box if necessary. Lunch and dinner are planned according to the situation. If necessary we’ll buy some papayas, bananas and oranges instead of risking missing some good pictures with a time-consuming restaurant stop. Beverages are not included in the tour price.

Please bear in mind that accommodation and transportation in Burma fall short of EU and North American safety standards. Always use common sense when crossing roads and railway tracks. For instance, if you can’t walk on dark streets in the night please take a strong torch with you. FarRail Tours cannot be held responsible and will not accept any liability whatsoever in the case of any accident or damage. We suggest you take out a comprehensive overseas accident and health insurance policy. 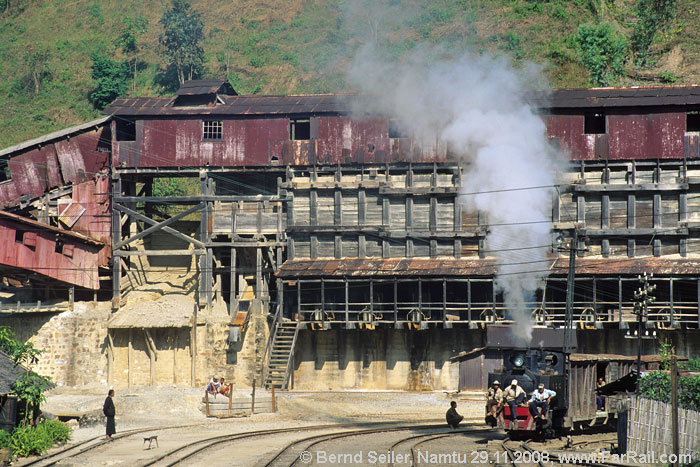 We recommend that you take some US dollars with you. Airport taxes and visa fees are payable in US Dollars. To change some money at the airport for souvenirs or beverages, other currencies like British Pounds are ok as well. With about $150 US you should easily be able to cover all expenses.

Charging rechargeable batteries in the hotels is not a problem. Sometimes there’s a power cut, and the hotel’s generator set is not able to deliver the same voltage as the country’s network. Therefore recharging batteries can take a longer time than usual. However, no one missed a picture on recent trips because of a battery problem.

Bookings after this date will be accepted, of course, but it might be impossible to organise a permit for Namtu and/or a reasonable priced flight.

Despite some difficulties we might face you’ll be positively surprised by this lovely country, and its friendly and welcoming people. 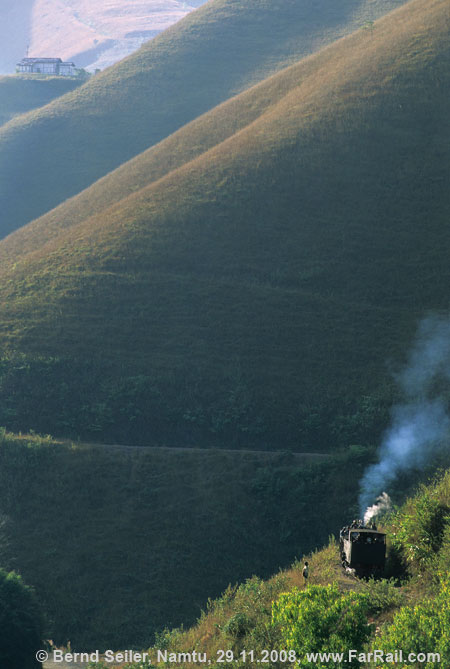 Land only: please deduct £745 from the tour price

Prices are based on special booking classes for the airline. If this booking class is not available any more we need to adjust the price. Your early booking is hence appreciated.

As a service to our UK-based clients, FarRail Tours accepts and will continue to accept payments made out in Pound Sterling until further notice. However, please note that from January 28, 2009, all prices quoted in Pound Sterling are indicative only and are subject to change without prior notice. This measure was taken by FarRail Tours due to the unprecedented volatility in the international foreign exchange markets and its impact on the valuation of the Pound Sterling versus other major currencies, namely the Euro as FarRail Tours' accounting currency. 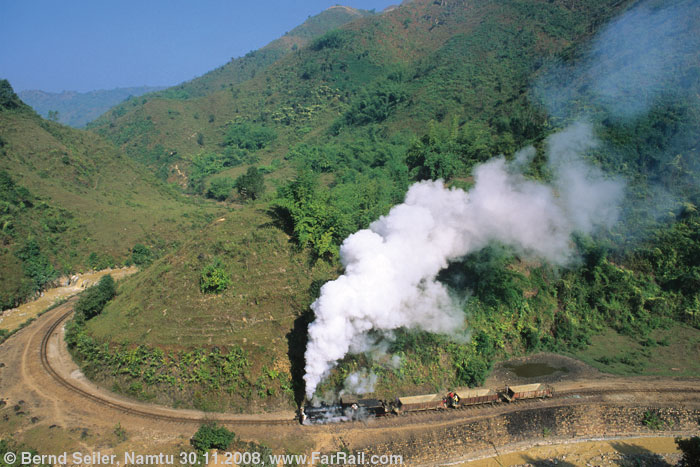