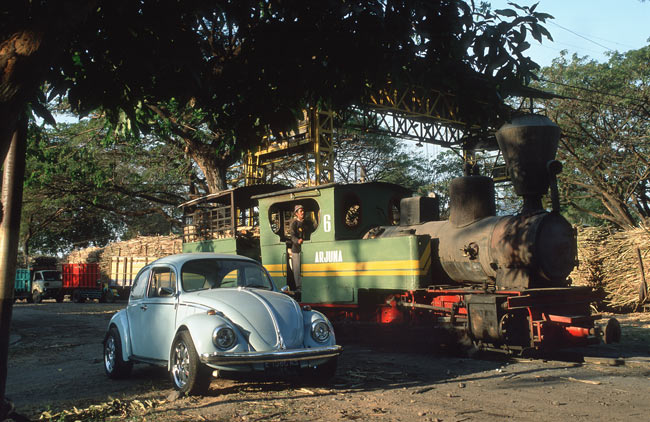 We have designed a tour for those who can’t effort a three-weeks holiday during summer. All the best mills of east Java are included in this Java’s Highlights tour.

Indonesia is the last stronghold of European built narrow gauge steam locomotives. But, this living museum of steam is not the only reason which makes Indonesia worth a visit. There are lots of ancient stationary steam engines inside the mills, some of them which have been working for more than 120 years, and we should not forget the amazing countryside.

In addition to the regular steam hauled trains we’ll also substitute a steam locomotive on other service trains which are normally diesel hauled. We can travel on these trains and arrange some additional stops and runpasts to get the maximum of good pictures. We won’t add passenger coaches to these scheduled trains, only authentic wagons are suitable. This is not so comfortable but it’s the only way for serious lineside shots on lines which do not usually see regular steam hauled trains.

The visit to Mount Bromo will give us the chance to enjoy a fantastic view over two active volcanoes, including the highest one on Java: Mount Semeru. The latter spits ash clouds high into the sky at frequent intervals. If we’re lucky we can see Mount Semeru from a sugar railway line as well which can form a spectacular backdrop for one of our steam trains. 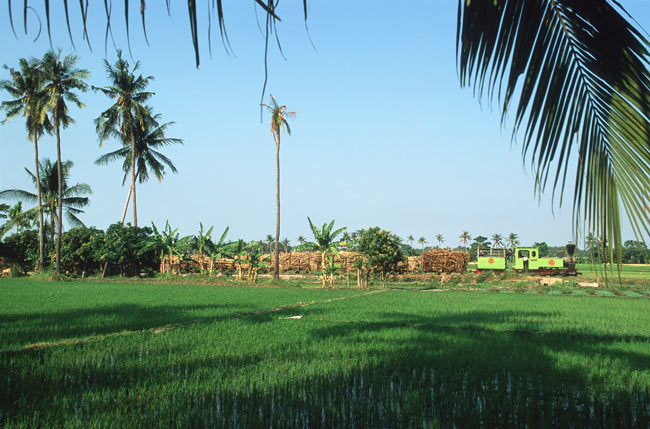 Indonesia has changed rapidly over the last decade. Quite a lot of the sugar mills - in former times well protected from the international market – have had to give up or try to be more cost efficient. This is the reason why some of the sugar mills have closed and why others have converted from railway to road transport. Although the present government introduced new taxes to protect the domestic sugar industry and save labour for the workers in the mills, many mills have changed their system of bringing in the cane. Given that the farmers around the mills are free to decide which kind of crop to grow, the system of field lines to the sugar cane fields has had to be abandoned. At many places it’s more profitable to plant other crops than cane. So it was necessary for the factories to switch to road transport anyway, to reach sugar cane fields far away from the mill. Because new lines to other fields will not be constructed anymore the truck was and is the only way for a mill to survive.

Despite all the losses over the recent years you can still experience the largest variety of steam locomotives in the world in daily use during the harvest season. Three mills still use steam to bring cane trains into the mills while others offer interesting and, sometimes, very extensive shunting in the large yards. 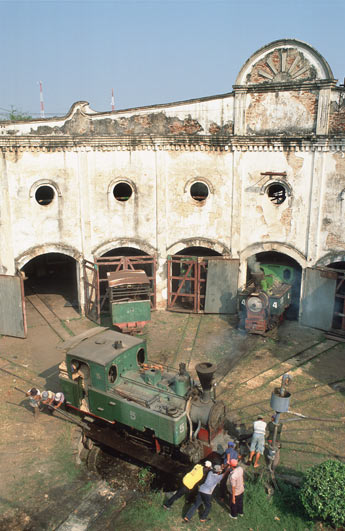 On the tour we will probably experience Mallett locomotives as well as Luttermöllers or Klein-Lindner axle locos. A special highlight is the geared locomotive built by Orenstein & Koppel. If still serviceable, we will hire it for an afternoon of shunting operations. While Orenstein & Koppel seem to be omnipresent on the island, other producers, mostly non-existent any more, are still part of the greatest narrow gauge steam show in the world: Decauville, Schwartzkopff, Maffei, Jung, Ducroo und Brauns, Hartmann and others.

Our route may differ from the above itinerary in order to get as many good pictures of steam trains as possible. On the way, side trips to historical or other places of interest are always possible. If agreed, the group may separate and meet together later. We will travel either by up to four hired jeeps which will give us a maximum of flexibility for special requests of some group members or by bus which has the advantage of a cool box to keep beverages chilly. A combination is possible too. Just let us know your preference when booking the trip.

We will choose our hotels by their distance from the next steam mill, not according to the offered standard. All our hotels offer air conditioning (exception: Mount Bromo, where temperatures can drop below plus 5 °C (40 °F) in  the morning) and a private bath room, some offer a pool as well. European style toilets are not common in Indonesia. The chosen hotels will have a European style toilet, but in small restaurants on the way or at railway stations for example you should expect Asian (or you may also say French) style lavatories.

On many days we’ll get up early (around 6.00 am) and may even leave without breakfast sometimes. The best time for photography is the early morning between half past six and nine and the late afternoon between three and sunset around 17.45 hrs. The time in between is, according to the high sun, not rewarding for photography, even the dedicated video film maker wouldn’t be happy with the results during the noon time. You can enjoy a bath in the sea when we’re close to a beach. Because of the active volcanoes on the island the beaches offer black instead of white sand. The sea itself may be polluted near the cities.

Please understand that in a country like Indonesia not everything will work as planned and/or paid for. The Indonesian (better to say the Asian) way to repair things with the help of primitive tools is amazing and will help us to fix some of the technical problems which may occur. Whatsoever, you never can be sure that the most important switch of the yard isn’t blocked by a derailed train, the mill have run out of fuel a day before our arrival, and so on. The whole traffic could be stopped by such a problem. In such a case we’ll try to head for another mill. Sometimes it might be impossible to get pictures and the only thing you can do is to relax and drink a cup of tea or a beer.

For the mills with the best chances for line steam we have planned some spare time. We haven’t planned to go to sugar mills with dumped steam locos only. However, if time allows and we’re just passing by, we can make a stop at such mills as well.

The climate is tropical with high humidity and temperatures between around 30 degrees Centigrade (90 Fahrenheit). Our jeeps/buses are fitted with air conditioning but you’ll do better if you acclimatize and accept the need to sweat a bit if you have to move quickly to get a photo.

The tour is planned with the dedicated photographer and video filmmaker in mind. The itinerary is designed for those who think it more important to get the perfect shot in the morning sun than a substantial breakfast. Meals are not included in the tour price. In addition, meals are a matter of time. Sometimes it might be necessary to postpone a meal or even cancel it. In such cases we’ll have to make do some cookies or bananas. Meals are cheap with the exception of beer and other alcoholic drinks. You should calculate with some two to ten pounds Sterling a day for food. Please remember that we are guests in a mainly Islamic country where alcoholic drinks (including beer) are not available everywhere. Chilled beer is another matter ...

Charter vehicles and trains represent the standard of our host countries, which may deviate form European expectations. While we will try to avoid long walks, some photo positions may require a bit of an extra effort. Travelling on trains and driving cars is at your own risk. The charter trains will look like real trains did some years ago. So we will not attach coaches to the trains. Please remember that the exhaust of the steam locos contains sparks who may harm your clothes or skin.

If you choose the option of travelling in a Jeep and would like to drive it, in Indonesia you should be over 25 years old and the holder of an international driving licence. On the other hand you should be willing to accept the Asian way of driving which is quite different from that what you have learned at the driving school. On the main trunk roads the traffic may be horribly fast and dangerous while on minor roads you may be the only motorised car amongst ox carts (without any kind of illumination during the night, of course). However, most visitors will learn very quick how Asian traffic works and will have additional fun driving a car without the restrictions you have to care about in central Europe or north America. There is no insurance for the cars available. So we have to pay for dents ourselves, please consider this while driving. The one and only rule of the traffic seems to be not to touch other traffic participants. 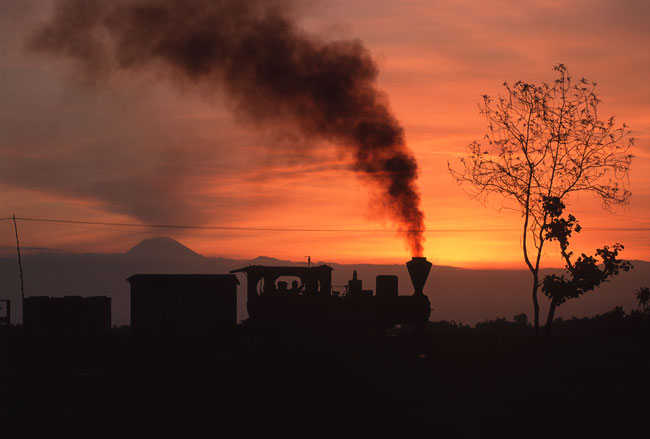 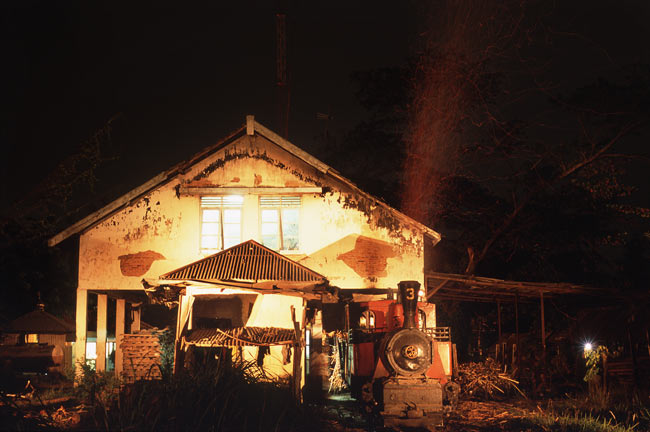 Please bear in mind that accommodation and transportation in China fall short of EU/US safety standards. Always use common sense when crossing roads and railway tracks. FarRail Tours cannot be held responsible and will not accept any liability whatsoever in the case of any accident or damage. We suggest you take out a comprehensive overseas accident and health insurance policy.

Later bookings will be accepted for the then actual flight prices.

Without international flight: please deduct £485 from the tour price. 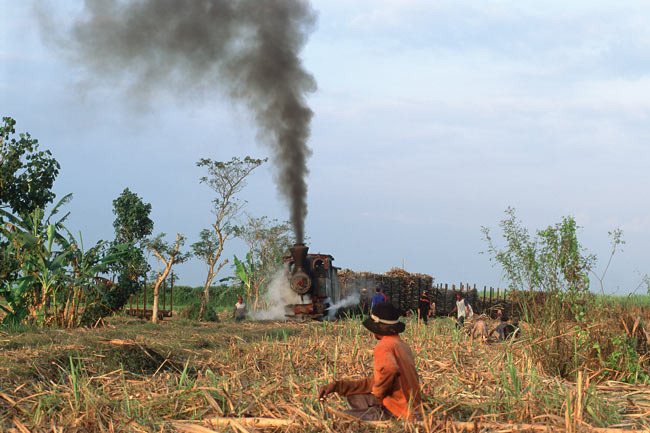