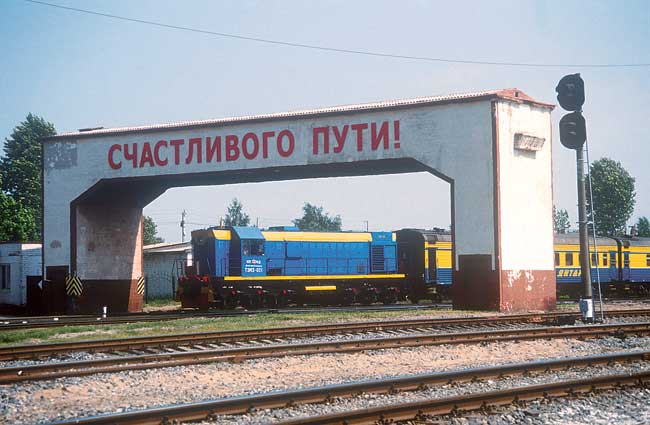 The contrast between old Prussian Station buildings along the railway and Russian Rolling stock is just one of the reasons to go on this trip. We will also be allowed to visit the depots and have plenty of time for linesiding. Not much is left of the history of former East Prussia within Kaliningrad, but the small towns and villages still have the flair of their historic origins, mixed with sixty years of Russian history.

This trip will lead you to a part of Europe where the political consequences of the Second World War can still be seen. When the war came back to Germany (where it originated some six years earlier), it first came to East Prussia with devastating results. This lovely landscape changed into a desert of ruins, the ancient city of Königsberg, after it was declared to be a fortress was reduced to piles of dust and rubble. After the local people fled, were deported or died, the Soviets tried to eliminate all traces of the German heritage by renaming all cities and villages. Afterwards the Oblast Kaliningrad was declared a restricted area as a military zone until the beginning of the 1990ies. The current economic development seen in the Baltic region bypassed Kaliningrad and the scars of the last war can still be seen. 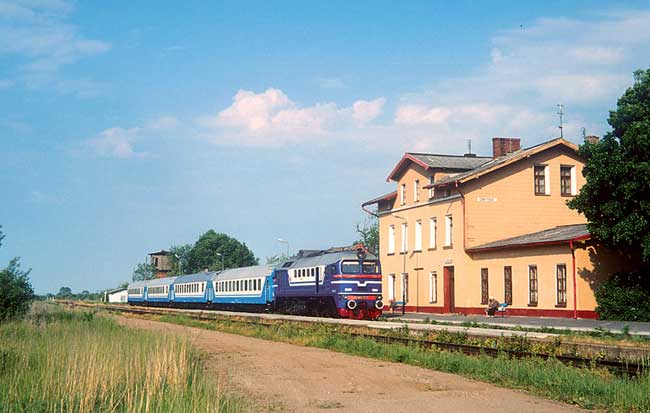 Constructed entirely as a double track railway the "Magistrale" is the most important railway line in the oblast Kaliningrad. It runs more or less straight from west to east. That makes it possible to try to take some glint shots during a sunset. The flair of the former "German Ostbahn" - open tracks with double pole telegraph wires – disappeared in the last decades. Now the line is skirted by trees and shrubs – that was standard on all Soviet-MPS-main lines. This protects the fields around against wind erosion and the tracks against snowdrifts in wintertime. So we find the best photographic places in the stations with original Prussian ambience. Reconstructed station buildings, typical housing for railway staff, loading ramps and streets with rough cobblestone pavements contrast with the Soviet light signals and level crossings with electrically operated barriers against thoughtless car drivers (found in Gvardeisk).

Some good photo locations can be found in the city of Kaliningrad itself. Several old buildings skirt the entrance to Kaliningrad freight station and two bridges give a good view of movements within the yard. A great gem is the passenger station Kaliningrad Yushnyi, former Königsberg Hauptbahnhof (main station). The striking station building with three big halls survived the war by some miracle and has been magnificently reconstructed in the last two years. The closest tracks to the station building are electrified for the "Elektrichka"-trains. The tracks furthest away in the back of the third hall are normal gauge tracks. A big gantry signal box spans the tracks at the north-west end of the station. Over the other end the remnants of another gantry signal box have been rebuilt to form a triumphal arch. Arriving passenger see the text "You are welcome!", departing passengers see "Have a nice trip!"

A event unique to central Europe is the arrival of an Express passenger train from Moscow or St. Petersburg. Military-style loudspeaker announcements and military march music escorts the arriving train as it slowly pulls into the station hall. "Provodniki" - the original Russian sleeping car conductors – open the doors and polish the handrails. Grandparents and grandchilds – the little girls with big coloured ribbons - wait for their dearest family members to arrive after usually a long period of absence. Of course this military flavoured ceremony calls for the presence of a fair amount of well armed railway policemen. Taking pictures of them might prove difficult.

Near to the station hall, but awkwardly placed, there are two 2-10-0-steam locos. One is a Soviet "L"-class and one a "TE", former German Kriegslok class 52 last allocated to the disbanded Mamonovo loco reserve.

If you are looking for the real East Prussia, you can find it right here. This branch line was not built along the shortest route. The track winds its way through a charming landscape. Forests and agricultural areas come and go. Lovely brooks, peaceful ponds and swamps are often reasons for fog in the morning. Storks can be seen wading through wet meadows. And the time stands still in most villages. The old German railway architecture still exists in a few places. Railway traffic is light and the only purpose is the transport of workers, employees and students from the Sovietsk county to Kaliningrad and back. The Sovietsk station itself is until today an exemplary medium-sized Prussian railway station. It is important as a border crossing station to Lithuania. At the other side of the big bridge over the Neman (Memel) river is the Lithuanian station Pogegiai.

The history of the East Prussian railways is unthinkable without the Samland railways (Samlandbahn), once the greatest private railway company of these province. It was built to supply small villages and move agricultural products, but became more and more important for the development of the seaside tourism along the north coast. The two most important branches, which are connected between Pionerskyi and Zelenogradsk and form a line triangle, were electrified in Soviet times. "Elektrichka"-trains (this is what all suburban EMUs are called in the former USSR) take thousands of bathers to the coast in holiday periods and on weekends. It' a good opportunity to meet the locals. The Zelenogradsk station is located in a track triangle. Pionerskyi – former name Rauschen Düne (that means "dune") - is not more than 200 meters away from the seaside.

Unfortunately one glance from the train window shows you the dying agriculture after the destruction of the Soviet "Kolkhos"-communities. Most of the agriculture areas lie fallow today. Only a handful of farmer has taken the step to become independent entrepreneurs.

The railway enthusiast - travelling or taking pictures trackside along the hard to find lines - will like the sound of the electric motors of the EMUs. Riding the "Elektrichka" is the best way to discover the lines, because it's hard to find the line from the country roads.

Hesitantly the western outpost of Russia, which is entirely surrounded by EU countries, is opening up to tourism. Thanks to its lord mayor the town Svjetlogorsk is successfully drawing on the traditions of "Seebad Rauschen". We will visit the imposing dunes along the Kurische Nehrung and the rebuilt Königsberger Dom. We will take a tour though the well preserved town centre of Sovjetsk, better known as Tilsit. Our main goal however are the railway lines of the "Kaliningrader Railway", the smallest railway directorate of Russia.

Especially if you are in Kaliningrad for the first time, you will be surprised at the excellent condition of the railway infrastructure and rolling stock. At the moment diesel locomotives are being replaced. New main line passenger diesels of the proven Kolomna class TEP70 were delivered in 2004. Brandnew shunting and local freight engines class TEM18D, which have been built in Russian Brjansk since 2005, are replacing the legendary TEM2. "Taiga drums" class M62/2M62/2M62U built in the Ukrainian factory Lugansk can be seen everywhere hauling freight trains. A reconstructed M62 is used for the standard gauge express train pair between Kaliningrad and Braniewo (Poland). Another one (also painted in the Russian national colours) is used on 1520mm gauge from Cherniakhovsk (Insterburg).

Four new, small RA1 railcars built by Mytyshchi have supplemented the fleet of D1- and DR1A-DMUs built by Ganz-Mávag and RVR two years ago. Also from RVR are the ER2-Electritchka-EMUs which run on the approximately 90 kms of commuter lines around Kaliningrad. Beside the two traditional styles of cabs, there is a new style which is applied to reconstructed units. The signalling is to the standard of the former Soviet MPS (similar to the EZMG of the Deutsche Reichsbahn). Prussian stations and offices add something special though.

In Kaliningrad only Russian is spoken. People in the tourist industry speak other languages too.

Generally the infrastructure isn't to west European standards. There is full mobile phone coverage. There are ATM machines in the larger towns, but these often have trouble with western cards. If you need cash for any small purchase it's best to bring Euro or US Dollar notes with you, which can be exchanged for Russian Rubels at ever present exchange offices "Obmien Valutyi". There is one of these exchange offices in the station Kaliningrad Yushnyi. 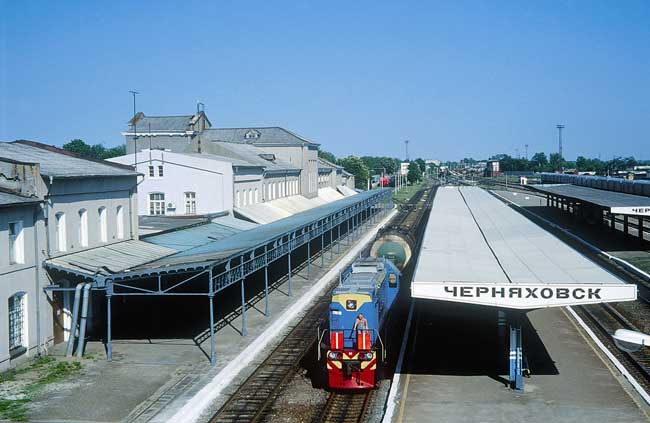 The hotels which are recommended by western travel agencies have by now reached an useful standard, also in matters of security. Even so we recommend that, like anywhere else, you don"t leave valuables around in your hotel room unattended.

Despite the fact that we expect good weather, we recommend you bring strong, high shoes and waterproof clothing.

The tour is organized by Udrius Armalis from Kaunas (Lithuania) and accompanied by Albrecht Fabian and/or Detlef Hanschke. Albrecht Fabian visited the oblast Kaliningrad in preparation for this tour in 2005. For the lineside shots we usually have sufficient alternatives depending on weather and railway traffic.

To make the best use of our time, we will start early and forfeit lunch in a restaurant (packed lunch). Our hotel provided breakfast and a warm evening meal.

The Russian sleeper, we will us to travel to Kaliningrad, only has a limited number of beds. The possibility of bookings after the end of the registration period depends on the availability of beds. We can always offer the alternative of a flight to Kaliningrad, but this will be more expensive than the train. The exact price will depend on the date of your booking.

The sleeper only has three-bed compartments. Singles occupancy isn't possible. Of course a single room is possible at the hotel.